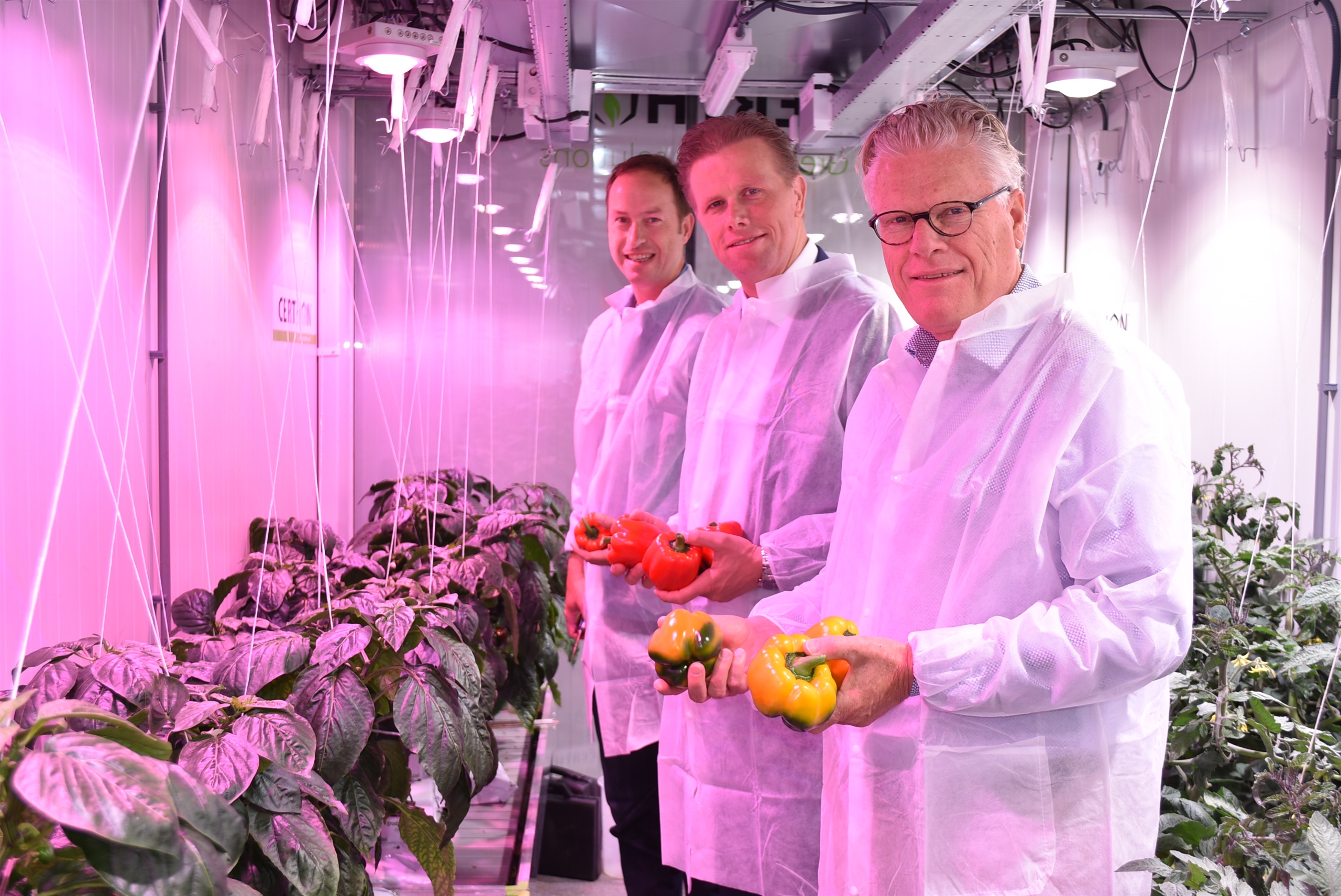 Dutch MP (Member of Parliament) Arne Weverling harvested the first peppers cultivated without daylight from the PlantyFood growth cell of Certhon this week.

Profitable system
Vertical farming and cultivation without daylight is attracting worldwide attention. Does it have a place side by side with greenhouse cultivation? For Certhon that does not really matter. “We focus on the customer and ensure that he gets a profitable system,” director Hein van der Sande explains. “You’re looking for the best cultivation method for a region. Sometimes that is a greenhouse and sometimes a system without daylight. It depends on the circumstances.” In addition, he sees, there is actually a lot of similarity between the two. “If you look at the technology of a three-screen greenhouse and climate computer, the step to a container is not that big anymore. It is glass versus sandwich panels. Sunlight is indeed free, but in certain circumstances it can also be an enemy. Look at the Middle East, for example. You must determine and calculate and then look at the wishes of the customer.”

Greenhouses won’t disappear
“Greenhouses will not disappear because of the rise of cultivation without daylight”, Hein says. Certhon therefore developed the PlantyFood cultivation method in addition to the greenhouse assortment. “PlantyFood is a combination of technology and knowledge. Together it makes the most optimal usage of space and energy possible,” Jeroen van Lent, Certhon’s specialist in cultivation without daylight, explains. On the Certhon grounds there is a test room for the PlantyFood cultivation method. In this growth cell, tests are carried out for propagation, breeding and large scale commercial production. Tomatoes and cucumbers have already been harvested and now, Dutch MP Arne Weverling picked the first bell peppers. 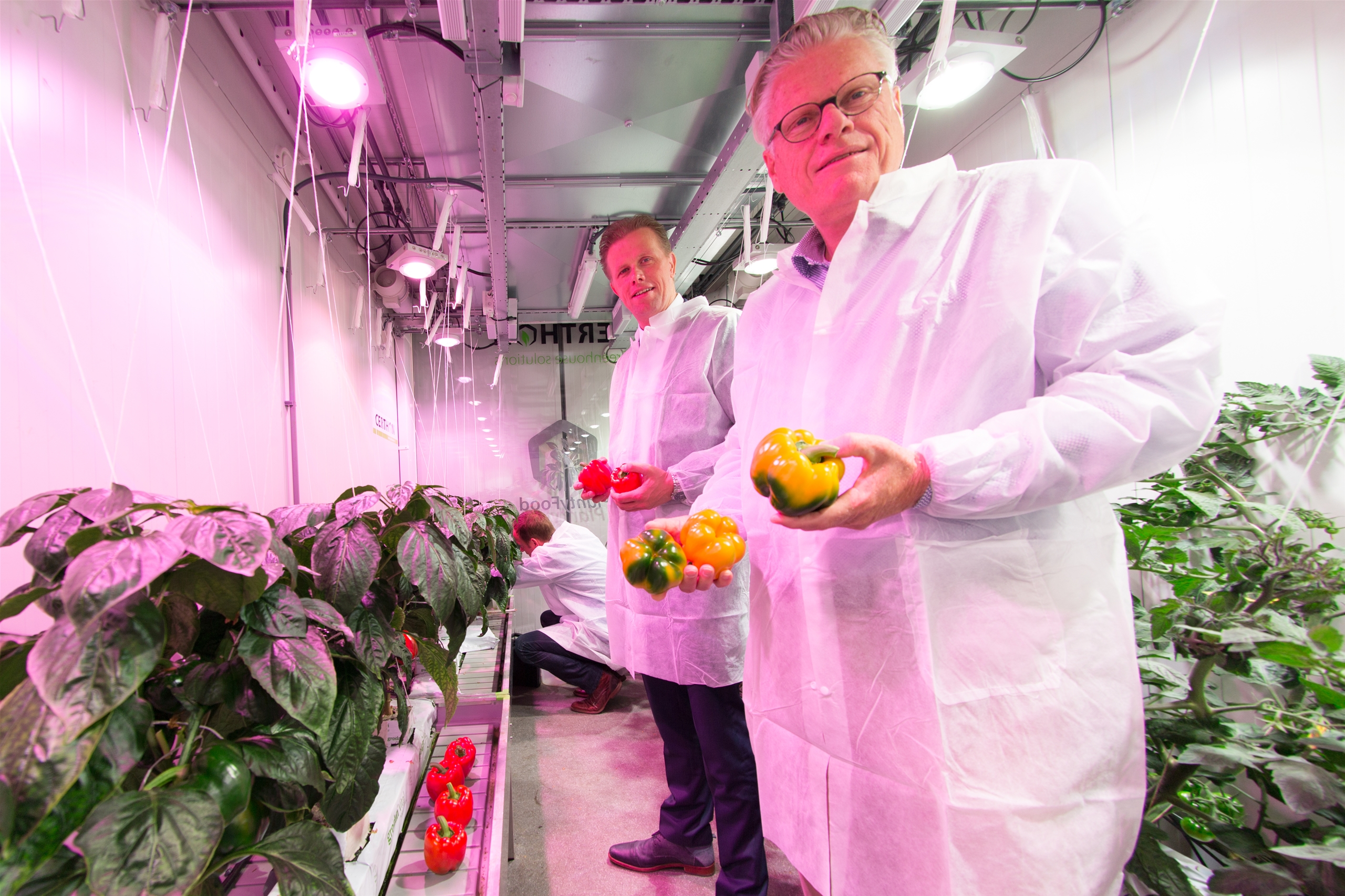 Sunlight spectrum
100 days ago, yellow and red bell peppers were sown for the first time. They were lit for 14.5 hours a day. “The fruits are good,” Jeroen says. “We did not have any setbacks.” This cultivation leaves a fruit on the first node, instead of the 2nd or 4th in the summer and winter cultivations. The peppers are grown with lamps with a sunlight spectrum. They are quite wide and imitate the sunlight – hence the cell is not as wildly purple as in many other growth cells. As in the other fruit vegetable cultivations, no crop protection products have been used in the PlantyFood growth cell. “You grow very organically. It is not impossible for something to enter, but of course the chance is very small.”

Production up
In the future, Certhon wants to investigate whether the production of peppers can be increased like that of tomatoes, which showed almost a doubling of the yield. “The yield has been stable for some time at 30-33 kg,” Hein relates. “In a growth cell, you can realize the optimal conditions for 365 days a year. Now, we’re looking for the best way to handle that. Are you going to increase the density, or cultivate in pots and automate further? This also depends on the user’s wishes.” Similar studies are also being carried out in collaboration with customers in other fruit vegetables and leafy vegetables, but also in ornamental plants: for example, in phalaenopsis and freesias. 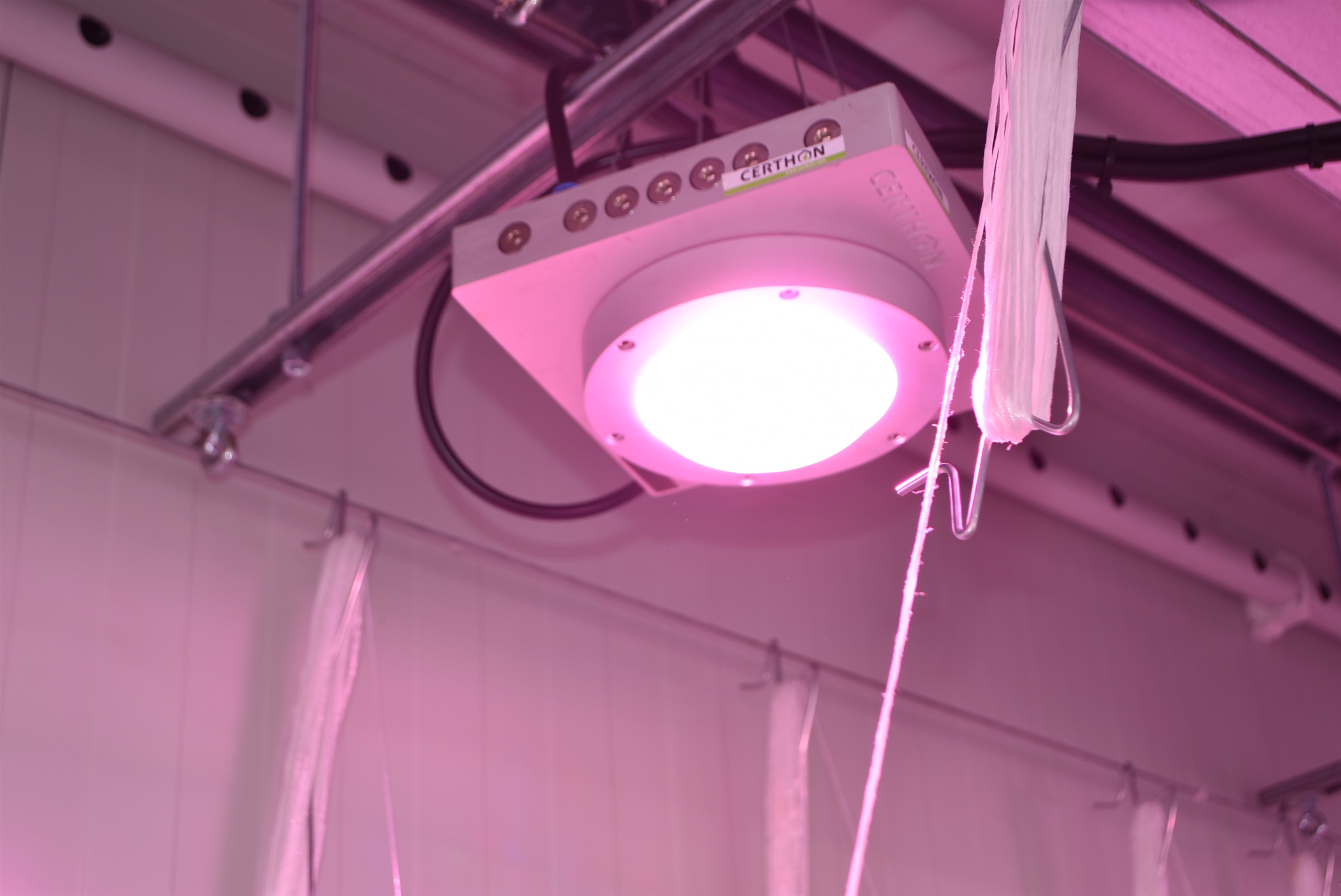